Whatever you may think, here is one url to the full text. Click on photograph below.
Some have been comparing him to a tea bagger. I agree they are nuts, but this man I believe needs to be talked about a bit more. He should not be grouped with tea baggers as he seems to have despised the G.W.Bush and company regime. I doubt Tea Baggers dislike our former Oligarch and his entourage.
All you out there who have perhaps been audited, as I have, perhaps are reserving judgement..or at least some. I'm not condoning what he did, but when a person is driven really and truthfully crazy by the government, especially the irs, I think there is what might be termed a "black understanding" ( i just made that up)...something done that is distasteful but which you find you have a degree of empathy with, but also which you may not be willing to openly condone. We are all waiting for all the analysts, but perhaps it won't come in this case, as it did with O.J. Simpson, which ruined a whole year of normal television. He'll probably just be pegged a nut and it's over. Meanwhile the IRS continues to threaten individuals who can't afford the types of attorneys that corporations can afford to get them off the hook.
Also, it may be he did other outrageous things we don't know yet that will finally convince us that yes, he was a nut....but, rambling though he may be, I understood most of what he said. So however you add it up, this dude gave his life for what he felt was a cause. I'm certainly glad more people were not hurt.
When I was audited, I came across so maaany other stories, firsthand and otherwise. I think I noticed more because it was happening to me. Let me tell you, aside from what this man did, just taking into consideration what had apparently happened to him....there are other stories much worse as the result of Internal Revenue SErvice actions. 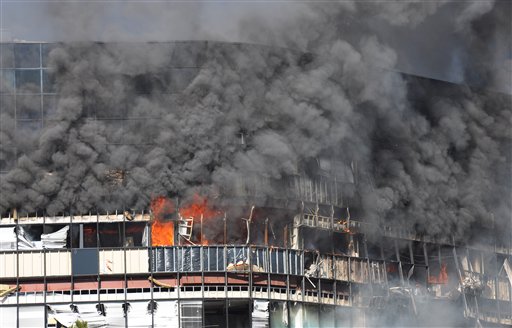 alternatively:http://www.t35.com/embeddedart.txt
here's an audio version on youtube:
http://www.youtube.com/watch?v=NivOMiI2AAo
Posted by handy77 at 3:06 PM